An Epic Livestream Event of Misbehaving, Squabbling, and All-Around Mucking About

Join Comedy Legend John Cleese and Superstar Rob Schneider from their living room to yours. It’s 100% live and anything can happen as they squabble, swap stories, talk shop, muck about, and even take some of your questions. You won’t want to miss this once-in-a-lifetime interactive mash-up!

VIP Meet & Greet
See the show and then hang out with John or Rob and 9 other fans for 10 minutes in a private video call. Ask all your burning questions and get a group selfie.

About John Cleese
John Cleese is a living legend in comedy. He achieved his first big success in the West End and as a scriptwriter and performer on The Frost Report. He went on to co-found the legendary Monty Python comedy troupe, writing and performing in the TV series and in films that include Monty Python and the Holy Grail and Life of Brian. In the mid-1970s, Cleese and his first wife, Connie Booth, co-wrote and starred in the now-classic sitcom Fawlty Towers. Later, he wrote and co-starred in A Fish Called Wanda and Fierce Creatures. He has appeared in many other films, from James Bond to Harry Potter, and has guest-starred in numerous TV shows. 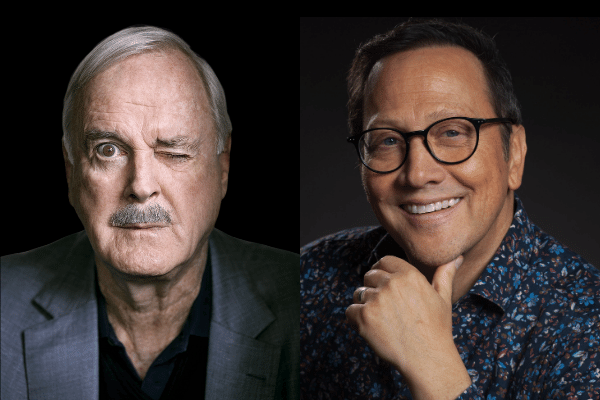