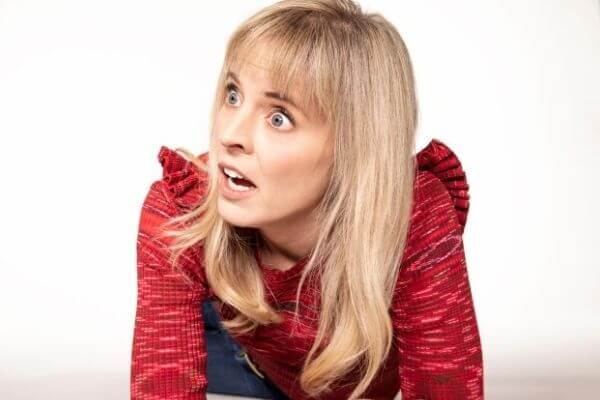 Be a part of the show! All ticket holders will be able to opt-in if they want to randomly be selected to share the virtual stage with Maria.

Group therapy doesn’t get bigger than this! Join me, Maria Bamford, and you, the Internet, in a special 2-hour show where strangers give me problems of any size and I attempt to solve them within 5 minutes! That’s right! An untrained comedian with a BA in Creative Writing will attempt (and perhaps fail) to help you fix something! For $15, you cannot get a worse form of mental health care for so little money! From changing the world to cheerleading you as you empty your wastebasket to tagging jokes, nothing is off bounds. Help Me, to Help You, Help Me! It’s a show AND a clock-eater.

ABOUT MARIA BAMFORD
Maria Bamford is revered for her deeply personal and experimental comedy about mental illness. She starred in the surreal, semi-autobiographical Netflix comedy series Lady Dynamite, about a comedian who suffers a nervous breakdown, and is the star of three unconventional hour-long stand-up specials: Weakness is the Brand, Old Baby and Maria Bamford, the special, special, special! Maria was the first female comic to have two half-hour Comedy Central Presents specials and starred alongside Patton Oswalt, Zach Galifianakis and Brian Posehn in the Comedy Central series The Comedians of Comedy and Netflix’s Comedians of Comedy: The Movie. She also created and starred in the cult hit web series The Maria Bamford Show, in which she plays all the characters.