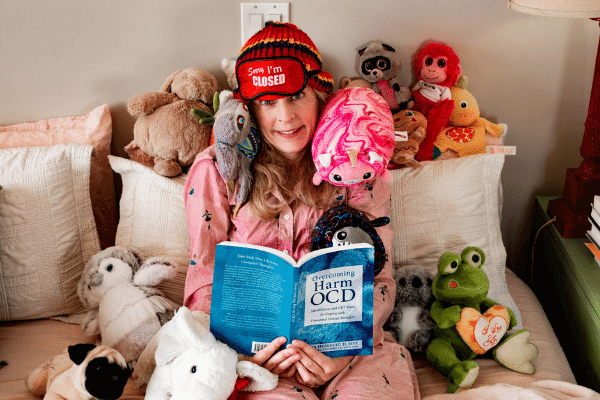 It’s $10 but if you can’t afford it, contact [email protected] for a comp code. After costs, all proceeds will go to the LA Downtown Women’s Center.

At 8 PM, Maria recites her most recent hour of stand-up. Takes questions from the audience who might need terrible help. Takes her meds, reads a book aloud and then reads silently to herself while eating graham crackers and milk. Turns off the lights and falls asleep.

Then there will be no production value beyond real sleeping, farting, getting up to go to the bathroom, and shouting out from night terrors, but Maria will be there for 9 hours (or until she wakes up) and gets a scoop of peanut butter and a diet coke for breakfast. If you still have the feed on, she will wake you up.

There will be feedback from any woken audience/sleepers in the morning where they will share what they are having for breakfast.

ABOUT MARIA BAMFORD
Maria Bamford is revered for her deeply personal and experimental comedy about mental illness. She starred in the surreal, semi-autobiographical Netflix comedy series Lady Dynamite about a comedian who suffers a nervous breakdown, and is the star of three unconventional hour-long stand-up specials: Weakness is the Brand, Old Baby and Maria Bamford, the special, special, special! Maria was the first female comic to have two half-hour Comedy Central Presents specials and starred alongside Patton Oswalt, Zach Galifianakis and Brian Posehn in the Comedy Central series The Comedians of Comedy and Netflix’s Comedians of Comedy: The Movie. She also created and starred in the cult hit web series The Maria Bamford Show, in which she plays all the characters.

All Ages Event: Parental guidance is advised for ages 12 and under.

This livestream will have closed captioning.